It is time for one of Boston’s great blood sports. No, not the Red Sox in the playoffs. And no, this isn’t about the Pats either. This is all about the great September 1st move date.

A period of time that strikes fear in the most hardened of Bostonians. The infamous date marks that time of year when the single greatest apartment shuffle happens city wide. And it’s all because of the college students. END_OF_DOCUMENT_TOKEN_TO_BE_REPLACED

Last night Rachel Maddow covered some sneaky tactics used by the GOP to impose new anti-abortion laws in Ohio using the state budget. This made me so mad I almost threw stuff at the TV screen.

None of the items covered are particularly new… Redefinition of when pregnancy begins, forced ultrasounds that the patient has to pay for, prepared statements the state compels providers to read aloud to patients. What is new here is that the GOP used the state budget to get these in all hush-hush like. It circumvented any debate or conversation as to why these provisions were needed in a state budget.

Nothing is more romantic than dancing close to the man you’re falling for. Unless, of course, he happens to be softly singing along to this in your ear as you two dance.

*update*
Then it ended. It happens.

This page will be all about links, sites, sounds and other bits from the blizzard. I’ll be updating the page periodically during the night and day on Saturday.

Some useful information to keep handy:

I had forgotten about his video for a while but something prompted me to go looking for it again. I personally, love the version that features Mad World, and have included the original for comparison. I loose all sorts of composure watching the Mad World version, FYI.

I saw this on a friend’s Facebook post and had to re-share. How to use a semicolon. Enjoy.

Happy Thanksgiving everybody. What a year it’s been there has been much to be thankful for but also some loss this year. I did want to take just a moment and tell you about my silly little Turkey Day Tradition. END_OF_DOCUMENT_TOKEN_TO_BE_REPLACED

Wanna see how good your color vision is? Take Xrite’s FM 100 Hue Test and see how well you can arrange the color chips. Oh, and in case you were wondering… I scored a 0, which is a perfect score. 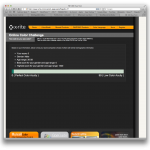 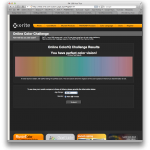